I cloned my repository that I'm currently hosting on Github. This project already contains a MSBuild file for building the entire project. It also contains some unittests, written using NUnit.

Tadaa! Using my own MSBuild file in the repository running in the build service of Team Foundation Service  resulted in a valid build. However, do you notice that warning icon at the bottom? It says: "No test is available in C:\a\bin\UnitTests.dll. Make sure that installed test discoverers & executors, platform & framework settings are appropiate and try again".
So it looks like my tests aren't being run.

I'm using NUnit for my unittests since I prefer it above the default MSTest framework. Team Foundation Service only has out of the box support for MSTest. However, Microsoft did something cool. They made it possible to use multiple testing frameworks in Visual Studio 2012.

Okay, so that gives me local support in Visual Studio to use NUnit. Now I want to add that testing functionality to the build server on my Team Foundation Service.

One warning: the dialog on the build controller that asks you to specify the location of the custom assemblies, only gives you the possibility to retrieve those assemblies from a TFS repository. So Git is not yet supported in that way.

Simply create a new empty project using TFS as version control and add the assemblies to a location. Then configure your buildcontroller to use those assemblies. My configuration looks like this: 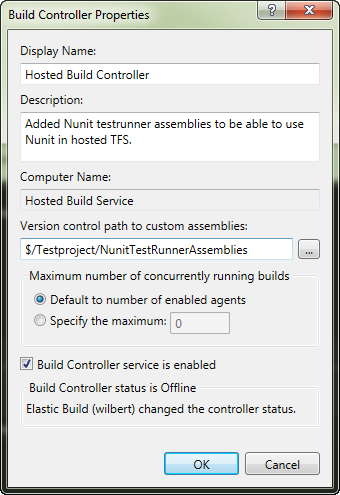 After that, you can run the build again and now TFS will start using NUnit for the tests in your automated build. The end result:

Note that this technique also works with other testing frameworks like xUnit.

Hope this helps someone. Happy hacking!

Popular posts from this blog

Small tip: use QueueBackgroundWorkItem for asynchronous work in ASP.NET

May 13, 2015
This is a small tip that I'm mainly publishing as a reminder to myself, but it could come in handy for someone else.

Background processing tasks in ASP.NET are hard. At any time IIS could decide to recycle the application lifecycle. The usual solution is to farm out these tasks to a (Azure) queue and let some other machine (for example an Azure worker role) process that queue.

However, with ASP.NET 4.5.2 Microsoft introduced the QueueBackgroundWorkItem method. This makes it possible to create small background processing tasks within the application lifecycle context.


Caveats:
A task started this way will only delay the recycling of the app pool for 30 seconds. So you need to complete your work within those 30 seconds. If not, the task will be killed.You need ASP.NET 4.5.2.
See for more detail the following links:

Why you should use git merge --no-ff when rebasing. 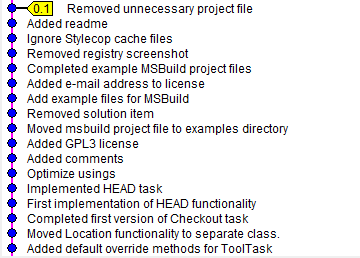 When working with Git my normal workflow was to create my feature/bugfix in a branch. When I'm ready to integrate it, I rebase the branch and merge it into master. This ensures that the master branch has a linear history.

This gives you a clean history which is easy to bisect.
However, when reading the help for git merge I came across the --no-ff parameter. It says:
Create a merge commit even when the merge resolves as a fast-forward. I decided to use it for my 0.2 version of my software. This created the following graph in gitk:
This code was first rebased, then merged with git merge --no-ff. An explicit merge commit is now created (where the tag 0.2 points to). Because the branch was already rebased, this merge commit does not contain a diff - it only exists to merge the two branches together.

This gives you several advantages on top of the advantages you have using git rebase:
You can see the name of the branch you merged back into master.
The name is part of the commit message of…
Read more

November 22, 2012
I’m currently working on a small hobby project in my spare time. I’m using Git as my DVCS. Most of the development is done on my laptop. And I would like to have a backup of my repository in a secure, remote location.

Dropbox or Google Drive can help with that. When you install the client an extra folder is created on your system. All files you copy to this folder will be synced to Dropbox/Google.

This in combination with Git makes for a perfect, cheap back-up solution. I started by cloning my Git repository in the Dropbox folder.

Here I created a bare (without working directory) clone of my Git repository in the Dropbox folder. Drop…
Read more